If you are reading this on my blog you’ll notice 7 beautiful grayed out social media icons on the right side of the header which turn into color when hovered over. This article explains how to create them. However, if you’re looking for an article about how to create social media share buttons (Tweet, Like, etc.) in HTML and CSS – click here. 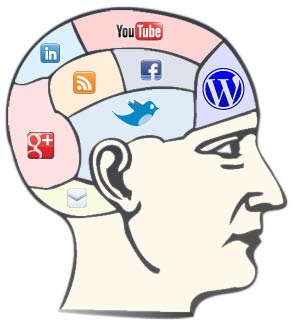 I seem to be getting more and more traffic from these various social media avenues so it makes sense to fill up that empty space with them – even though I’ve always had them in the sidebar.

As you will already know, Google takes loading speeds into account when ranking pages. Also, I hate waiting for sites to load. So I wanted to create these header buttons with a minimum amount of HTML, CSS and, more importantly, HTTP requests.

Here I have 7 social media icon images and all of them have rollover states. That means there could potentially be 14 HTTP requests for images just for these little buttons. The images themselves maybe small but it’s the separate requests to get the images that can severely increase page load.

So how do we cut down those image requests? Simple, by creating one big image.

Say hello to my best friend – the image sprite

Here is the image sprite I used to create the social media buttons and their hover states:

As you can see a sprite is one big image that can be shifted around to only display parts of it at particular times. Here each button is 32 pixels by 32 pixels. They are put right next to each other so that there is no space in between – this makes it easier later on when you do the CSS positioning.

And you can click here to download the PSD so you can rearrange the icons and add more yourself!

HTML for the social media buttons

As I’m using the Genesis theme for WordPress (that’s an affiliate link), I enter the HTML into a text header widget.

Here is the HTML:

As you can see that is just a simple HTML list for each social media item and each list element has it’s own ID (this is for the CSS positioning). I’ve taken the links and the titles out so you can see what’s going on.

CSS for the social media buttons

As you can see, the CSS imports the image “social-media.gif” just the once and then alters the position of the image within the 32 pixel square space to show the correct button.

Social media buttons in the header

So why am I putting them in the header when they’ve always been in the sidebar? I’ve learned through testing websites over the last few years that being obvious works: a big button is much more likely to be clicked than a small one.

When I find a good website, I usually look for the Twitter link. If I really like what they’re doing I’ll sign up for newsletters. If I can’t see where to do this within one second, I’ll leave, maybe never to return!

So, I’ll hopefully get more followers on these social sites – I’ll let you know if I do or I don’t.

Finally here is the list of buttons. Why don’t you join me in one of these places? 🙂

Do you have social media links in your sidebar or header? How did you create them? What do you think of mine? Are they the right shape and in the best position?