This is a different kind of blog post. I won’t be talking about business. This is personal. It’s about a friend of mine who died recently. 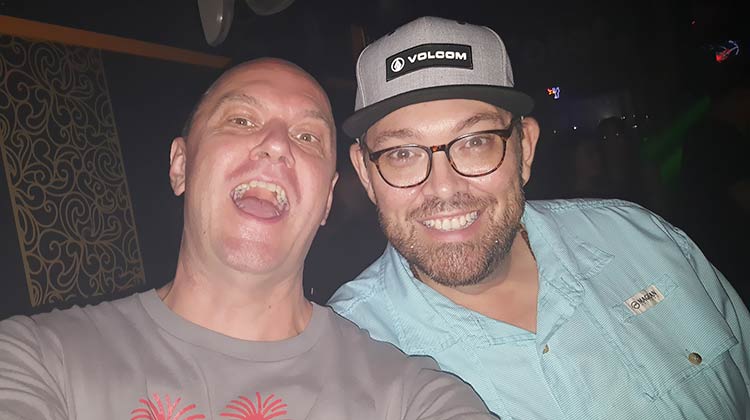 I got to know Rob about a year ago through Amazon FBA meet ups he ran in town. Amazon FBA is a business model that involves sourcing products in China and selling them on Amazon.

Rob hit on a crazy idea of identifying, sourcing, and selling a product on Amazon during the meetups and giving away the proceeds to a local hill tribe community. A few of us donated a small amount of money and I was roped in to do the artwork for the product – a flag football game set.

So that was the end of that idea. Or so I thought.

Rob and I started to meet for lunch and coffee to talk about business.

This is definitely one of the best things about living in Chiang Mai. When I was in London, I was starved of the opportunity to talk business. I would go to as many entrepreneurial meetups as I could find on MeetUp.com. Some of my best ideas come from interactions with other entrepreneurs. It was always an effort to meet business people in England. But, here, all my friends are entrepreneurs!

I seemed incapable of choosing products that could sell on Amazon so my interest in FBA waned. So Rob and I would talk about … life.

Rob had been in the nightclub business in Tennessee. While he may have enjoyed the business side, he definitely didn’t enjoy the late nights, stress, and having to deal with drunks, addicts, and dealers.

After a few years of trying and failing with online business, he eventually found some success with Amazon FBA and was finally able to leave the nightclub business.

Being able to support yourself and your family in America with an online business is, in itself, a huge win.

However, Rob then jumped on the next level of freedom when, in his forties and despite hardly ever having set foot outside the US, he boarded a plane to Bangkok and settled in Chiang Mai. 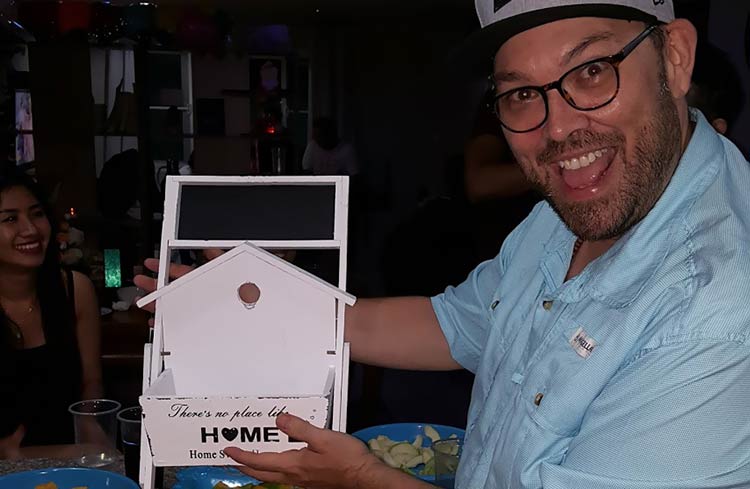 So that’s how I got to know Rob Fortney, a well-liked member of the Chiang Mai farang business community. Here he is on his birthday last year. He knew how to throw a party.

And we had another thing in common: our unending gratitude for the situation we’d found ourselves in. We both loved Chiang Mai. We both loved our lives. And neither of us would ever get bored of saying so.

Maybe because we’d both spent so long in “realsville” we knew to appreciate what we had.

Chiang Mai, the 900-year old capital of the ancient Lanna kingdom, sits in a flood plane of the Ping river, surrounded by a mountainous area which borders Laos and Myanmar. 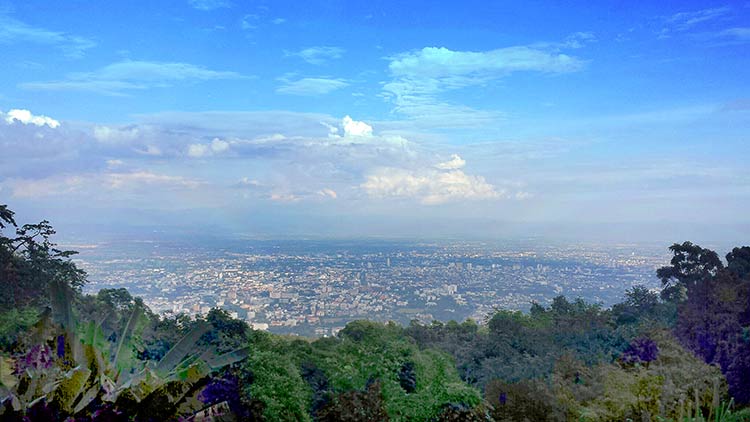 Around the turn of the year is the best time to be here. The weather is warm and sunny but not too hot and the last rains of the wet season keeps the lush vegetation a beautiful green.

The winding roads through the hills and mountains are famous as some of the best drives in the world. Tourists and travellers flock to Chiang Mai to use it as a base to discover the whole region.

Rob hosted another party at his house on Christmas Eve night. We’d arranged to “do lunch” in the new year. A few days later, he set off on his bike into the hills. That was the last I saw of him. 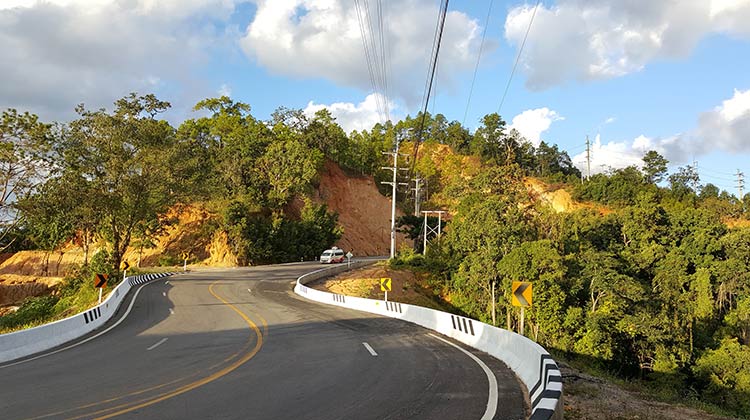 Above is one of the many twists and turns of the c. 100 km road between Chiang Mai and Pai. The roads are wide, well maintained, and go through beautiful areas of northern Thailand.

The last entry on Rob’s Facebook and Instagram is a smiling selfie in front of a Doi Inthanon National Park sign. The park includes the Doi Inthanon mountain, the highest peak in Thailand. Rob is wearing a coat and looks quite cold.

He says in the caption that, if the rest of the year is anything like the first 16 hours, then it’s going to be an amazing year.

The news filtered back to Chiang Mai a couple of days later. It took me hours to comprehend that I would never see this big guy that was so full of life ever again.

I retreated into a bit of a shell. I didn’t want to see any of our mutual friends. I wanted to process this information away from other people. I left Chiang Mai briefly and missed his funeral.

I found it hard to understand (and still do) why I can continue this “grand fantastic life” – as Rob would call it – but Rob himself now can’t. And, as always when someone dies before their time, you feel so bad for his loved ones, his family and his girlfriend.

It turned out that one of the reasons he was on that trip was to deliver money to a poor hill tribe community. His penultimate Facebook and Instagram post is another smiling selfie with some Karen kids.

It turns out the crazy idea actually worked. Our donations that bought the inventory made money on Amazon. And one of the last things that Rob did was to deliver the profits to an underprivileged community in the hills.

Some people don’t believe in luck but I can’t help but feel extremely lucky.

I was born into a financially secure family in England; I was lucky to discover meditation, affirmations, and positive thinking in my early thirties; by my late thirties, I was lucky enough to be able to support myself with my online business; and then I ended up in Chiang Mai. If that isn’t life’s winning ticket, I would like to know what is.

Rob seemingly assimilated the Buddhist concept of making merit which is practiced all over Thailand and other Buddhist lands. If you do good things it brings good results, determines the quality of your next life and contributes to your growth towards enlightenment.

In Rob’s words: “I know this may sound a little superstitious but every time I’m about to launch a product, I dedicate a whole day of going around town and doing everything that is supposed to give me luck. I know, call me stupid. So what I do here in Chiang Mai is… I visit every temple, rub every Buddha’s belly and try to get a blessing from every monk I see. I throw a penny in a fountain, set some birds free on a mountaintop and offer some red Fanta at a Buddhist shrine, just hoping to get the best luck I can just for that one specific day.”

A couple of weeks after his Thai cremation service there was a gathering to celebrate his life held at Jed Yod temple in Chiang Mai (one of Rob’s favorite temples which he’d visited on his Lucky Lucky Day). 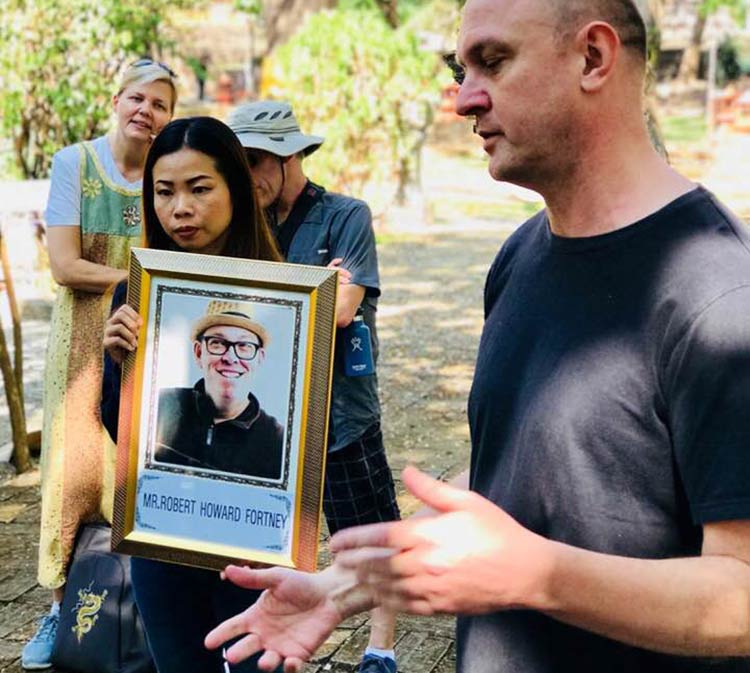 Scores of people turned up. Many of the younger Chiang Mai digital nomads were keen to point out how much Rob had helped them with their fledgling businesses. Time and again, they said they were waiting for the “hard sell” after the help, but it never came. The photos above and below are courtesy of Petter Miller. 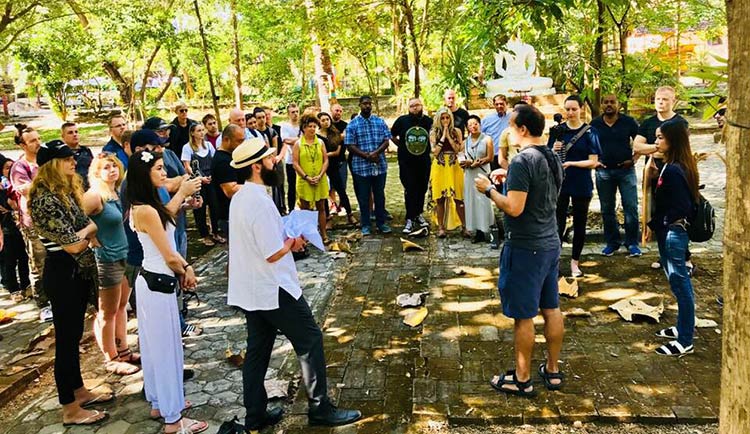 Rob never wanted anything back. He was happy to help people discover the great life and freedom he had found.

Legacy, this life, and the next life

I don’t want to pretend that Rob was some sort of saint. He was no angel and had the same amount of faults as we all do. But I’m determined to remember my friend in the best possible way. I don’t want just to be sad about his untimely passing.

Instead, I want to use the experience to further my determination to help people.

After all, you could make loads of money, have a grand fantastic life, and party like it’s 1999 – but it won’t mean anything unless you’ve helped a few people on the way. I’ve got to try to leave the world a better place as a result of me being here.

He ran Amazon Gorillaz website and YouTube channel with his business partner Paul Adams. He had also started a podcast with Nick Nimman called the Digital Journey podcast for Empire Flippers.

Here is a video tribute Nick put together of some of the things he said in the podcast. I hope it inspires you all in some way.