One of the very many benefits of interviewing various creative business people for the Design and Marketing podcast is that it takes me away from my small world.

During the last few years on this website I have mostly written about what works for me. When I was starting out online in 2006-2008 I basically wrote any old rubbish blog post and I would receive a bit of targeted traffic. And, because we hadn’t experienced the worst economic recession since the Second World War yet, I got work from my blog.

But, one thing you can be sure of in life and on the internet is this: change.

Things are different today. You have to market yourself through your website, through social media and through relationships. And someone who knows that is illustrator David Cousens. I spoke with David the other day to talk about how he’s managed get paid to work from home drawing pretty pictures for the last few years.

Since an early age, and I mean a very early age, David liked to draw. He found at infant school that a story with a drawing in it would always earn him extra marks. There’s general web marketing lesson here, by the way:

So, everything is better with imagery, we got it. Here’s one of David’s masterpieces:

We spoke about many things. But one of the most interesting of the business-related matters we talked about was David’s success in finding a great platform for his work through Twitter. Because of connections he’s made through Twitter he was able to join a respected group of illustrators to further showcase his work. How did he do that? David drew an interesting analogy…

Imagine that you’re in a party…

David actually talked about being in a pub. As not all my readers may be acquainted with the British public house so let’s say: imagine you were in a any social situation like a party where there are lots of people all talking with each other.

So, David advocates joining in conversations on Twitter where you can add something meaningful to the debate. But also, make a comment that fits within the flow of the conversation, not a comment that necessarily needs acknowledgment.

He organically developed his circle of Twitter followers back when #FollowFriday actually meant relevant people would follow you if tagged.

Being an illustrator with a very eye-catching style, one of his images has gone almost viral on Tumblr. This was a job for a client which fell through and, instead of filing it away in his portfolio, David shared it on all his social media sites. 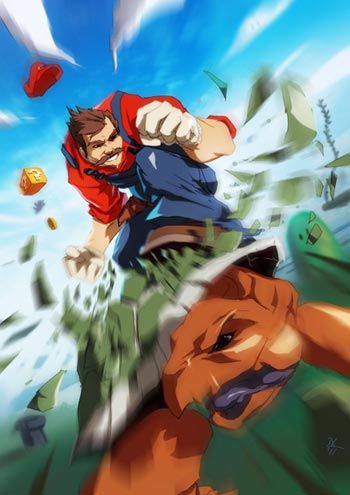 The above image has had an amazing 11,000 shares and reblogs on Tumblr. This may not get David any clients but there’s no such thing as bad internet notoriety.

Give a little love and it all comes back to you

David wasn’t taught how to turn on a computer at art school so he’s picked up all his technical skills online. I know myself how amazingly supportive the design community can be. I have lost count of how many times I’ve been helped out of web development hell by a kind soul of a forum.

David makes sure he helps people when he’s given the opportunity. As do I (in the last half hour I have issued WordPress advice to two of my readers, coincidently.)

You have to make sure you have a product that people want. But, with this in place, you can build up a useful network and find work by interacting with the right people on social media. This requires subtlety and perseverance.

But don’t just take from your social media world. You have to give back too!