The second show of my Design and Marketing Podcast has an interview with Andy Sowards, a web designer and blogger from Virginia, USA.

If you haven’t checked out Andy’s blog you really need to – it’s going to be one of the top web design blogs out there.

The great thing about Andy’s story is that he was working in Subway after having left college only a few years ago. Fast forward only three or four years and he’s a sought after web designer with a blog getting thousands of visitors a day.

Not that there’s anything wrong with working at Subway, of course, and definitely not for Andy because that was where he met his wife. And this brings me on to another amazing part of the Andy Sowards story – that fact that he’s the father of four very young children!

In the interview we talk about:

It was really great to talk to Andy who, although busy, is a very relaxed and easy-going guy. 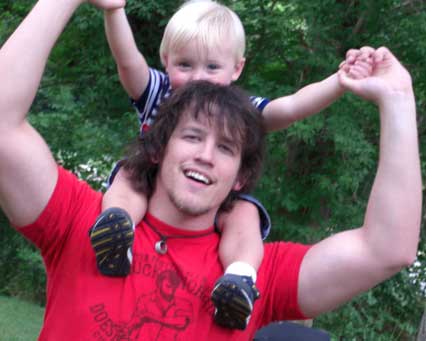 Before the interview started I couldn’t get Skype to work. I spent about 15-20 minutes messing around and finally, after restarting my mac, I was able to do the interview and Andy was super cool about that!

Probably the two things that have the biggest contribution to Andy’s success are: hard graft and his ability to engage with people. Andy says in the interview that if there’s one thing he’s learned while blogging is to keep at it!

You can see his gift of engagement, too, through his Twitter stream. One of the ways Andy first started getting his name about as a web designer was through Twitter. I have found Twitter great for information but not great for getting work. Andy, however, really helps people out on Twitter. He answers queries and gets involved in conversations.

He also engages a lot through his Facebook fan page. This is obviously the way forward with social media.

Of course, you have to remember that the blog is the most important thing of all when getting your name and business out there. But you can learn a lot about doing social media correctly by following Andy’s Twitter or Facebook.

How am I doing?

The podcast with Tara Roskell was downloaded 232 times and the video was viewed 122 times!

Tell me what you think of my interview with Andy. Or tell me if you’d like me to interview anyone in particular.

Here is the subscription link on iTunes.