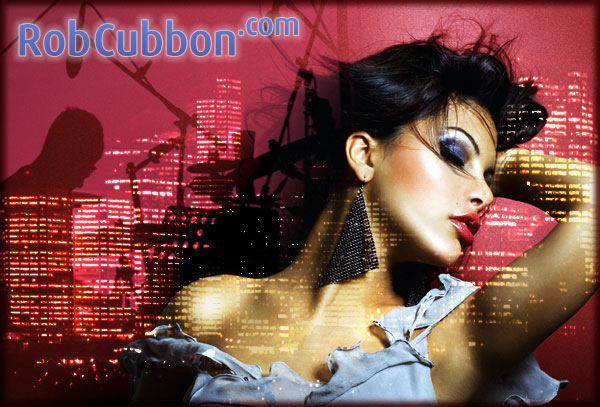 Here, as promised, is a short tutorial about creating montages. Here is a montage of three different images which gel together without having to laboriously cut anything out.

Layer masking with a brush

I sized the cityscape image over the picture of the girl and played around with layer blend modes until I chanced upon one that seemed to do the trick. It’s Color Dodge at 88% opacity.

Then I needed to get rid of some of the building’s lights from her face. The way to do this is to create a layer mask. In the Layers palette, simply click on the Add Layer Mask icon. It’s at the bottom of the palette and looks a bit like a washing machine (see below).

When you’ve done this a white rectangle will appear adjacent to that layer and, when you’ve selected the Brush Tool (B) your foreground colour will be black and you’re ready to start editing the layer mask.

When the layer mask is white it is unmasked and black is masked. So “painting” on the layer mask with a black brush will “erase” areas of that layer. Use a soft brush and play around with opacities.

Layer masking with a gradient

Then I overlaid an image of a band. I wanted the left-hand side of the image to show the drummer and the right-hand side to show more of the girl.

Same technique as above. Click on the Layer Mask icon in the Layer palette to give yourself a blank layer mask. Click on the Gradient Tool (G) and drag (in this case horizontally from right to left more-or-less in the centre of the image) where you want your gradient mask. You can do this as many times as you want to get the right effect (no need to Cmd/Ctrl-Z).

This band layer is set to Lighted blend mode at 50% opacity.

Adding a border around the image

Add a new layer (Cmd/Ctrl-alt-shift-N). Select all (Cmd/Ctrl-A). Go Select > Modify > Border… add a value of, say, 5 pixels. You may want to feather it a bit. And fill it with a dark colour from the image.

Here is the layers palette for the finished image.