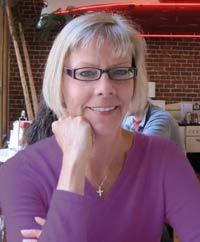 I have been pestering my latest interviewee for the Design and Marketing Podcast (subscribe or leave a review, folks) for weeks and weeks before she gave in!

Louise Myers is a fantastic example of a designer who has never stopped learning.

You have to listen to this interview because there is so much to take from Louise’s inspiring story.

The main points I got from her story were:

Louise’s background is in catalog design and at one point in the 90s she probably thought she could go on doing that forever. However, that work dried up for several reasons – not the economy, for once. But, it shows you that you can’t really rely on anything – and especially not in this business.

If you have a good year and make lots of money – put half of it in the bank! This is the way Louise was brought up (and me as well!) and this is invaluable advice for freelancers.

Although Louise had set up her work from home business around catalog design she had to adapt to survive and she branched out into all sorts of other areas of graphic design. She has diversified in order to grow her design business.

However, you don’t want to be a jack of all trades and a generalist because then clients won’t be able to pigeon-hole you and never know when to call you! All successful graphic designers have some sort of specialty that people can associate them with.

Success is the ability to go from one failure to another with no loss of enthusiasm, as Winston Churchill would say. Louise can bear testimony to this. She may say that her success was in part due to luck but I’m not so sure.

So how did she do it?

The thing with the traffic? Simple, she kept on trying. This time last year, Facebook was moving all its (fan)pages to the timeline layout. Louise wrote a post about it. Bang! The rest is history.

If you blog and blog and blog, sooner or later, you’ll hit on a subject that has huge demand. Because the Facebook timeline page design was so new, there wasn’t so much written about it on the web. Louise had chanced upon a goldmine of visitors – that later became a goldmine of subscribers, and then and a goldmine of customers. Learn more by listening to the interview.

As Louise has shown us, if you score a blogging “home run”, you’ve got to pick up the ball and run with it. That terrible mixture of sporting metaphors means: if you’re getting great traffic blogging about a particular subject, blog more about that subject. And then, productize!

Pay particular attention to social media. And by that I don’t mean tweet, share and like, I mean react quickly to any social media changes to layout and visuals. I have found out myself these are a particularly rich vein of traffic. Just last week, I posted about the new YouTube channel art and already I’ve had over 1,000 visitors to that page here and over 500 video views of the movie at YouTube.

Social media is going more and more visual and graphic designers can capitalize on this!

Don’t be ashamed of your naked Facebook page! Go to LouiseM.com and sign up to her mailing list to find a host of cool social media design tips. And I would also advise you to get her great e-book: “Create your Facebook Timeline Fan Page to Look Great and Engage Fans” on PDF or Kindle.